Operation: Secure target and report to base. NO casualty allowed. Absolutely not. No Weapons.

0700 hrs
- Pickup is at the stroke of the hour – perfect timing. The Transporter HK is raring to go.

1000 hrs
- Mission Brief
o Task one – conquer the DOTS
o Task two – beat the sun
o Task three – burn the tarmac
o Task four – get a cooler and get back to base!

1100 hrs
- The CAR
o A bright red Tata Bolt. (If James Bond swears by the Aston Martin, just because it is British, it has Tata for me. Not that I cannot get a Jaguar – Yes, its Indian now – blending in with the crowd would be much easier with so many Tata cars on the road!)
- The Equipment
Well, the list is long, really long but here are some highlights
 Revotron – the first petrol turbocharged engine developed by an Indian manufacturer
 Voice Command with Touch Screen Entertainment – I am a secret agent and to do a trillion things when I am driving, I need the car to listen to me! So, I got Harman-Kardon to custom build one!
 Corner Stability Control – I am going to be driving like a mad man most of the times trying to save the world. Commoners get 8th-gen but I have a 9th-gen ABS with EBD with a bit of special assistance through corners to ensure that I do not have to worry about making the turn while saving the world.

1200 hrs
- Task One – We ran around the dusty cones trying to find traction on the withered soil, baked to the core by the blaring sun on to the hurdle. While we braced ourselves to avoid being tossed around in the car, Purujeet made a mockery of the dots making us look like fools as we glided across the hurdles.

1300 hrs
- Task Two – We had to drive a 100 kilometers on an exceptionally hot summer afternoon.  You could almost cook an omelet without even a magnifying glass. But the HVAC engineers have pulled a rabbit out of the hat, just like the suspension engineers. With no tints to save us, the cabin mercury levels never got a chance to shoot. The ride was so comfortable that I actually thought we were doing 60 when we were actually doing 80. *cough*120*cough*beyond speedlimits*cough


1400 hrs
- The essential F&B break. Time to hydrate yourself for the daunting task three. The food was sumptuous. A morsel more and I would have forgotten the mission!

1500 hrs
- Task Three – I take the Revotron. I had only heard about it, but nothing prepared me to come to terms with what it really was. The first Indian turbo petrol is a gem. There would be many who would point out its shortcomings – the foremost being economy – which is true – but, the way this engine behaves, is a revelation. You keep the tacho needle a tad above 1500 and you are at the sweet spot. Till 4500, the car is just going to add oodles of power. Yes it has a sport mode which has all the magic. The Economy mode, as most Indians would prefer using, though, is not really tragic. In terms of performance –no – you expect the car to be mellow but economy – yes- it is a bit tragic. The diesel in this regard is the perfect buy for the lousy Indian car buyer. Just enough power to lug you around and loads of miles per drops of a gallon!
- I revved the petrol hard, gunning through the winding roads with two of my co-agents and a damsel (no she wasn’t in distress) holding on to dear life trying to force a smile on their faces just not to possibly offend me in case I may decide to go even faster.
- Reached the vantage point. The tiger covered! No casualties. Just passed under the radar!

#BoltDrives @blogadda @harishk99 Hyper Lapse! We bolt through the expressway!
A video posted by High On Throttle Customs (@godsentevil) on Apr 18, 2015 at 11:52pm PDT


1600 hrs
- We stopped for a cooler. Time to split and bid adios to my co-agents. And yes the damsel too!
- Well, until the next time! Mission impossible is just too cliché!

It was a Sunday well spent at #BoltDrives with the Bolt, the brand new hatch from Tata Motors in association in our good friends – Blogadda. The car looks fresh and new but carries over the legacy of the legendary Indica in terms of humungous cabin space. But the best part is what it doesn’t carry is the lack of refinement, NVH and bad handling and poor interiors. The new car defines the new ideology of Tata Motors where they plan to build cars that are well built, good to look at and nice to drive and luxurious to be driven in!

To know more about the Tata Bolt and read expert reviews,
http://www.carwale.com/tata-cars/bolt/ 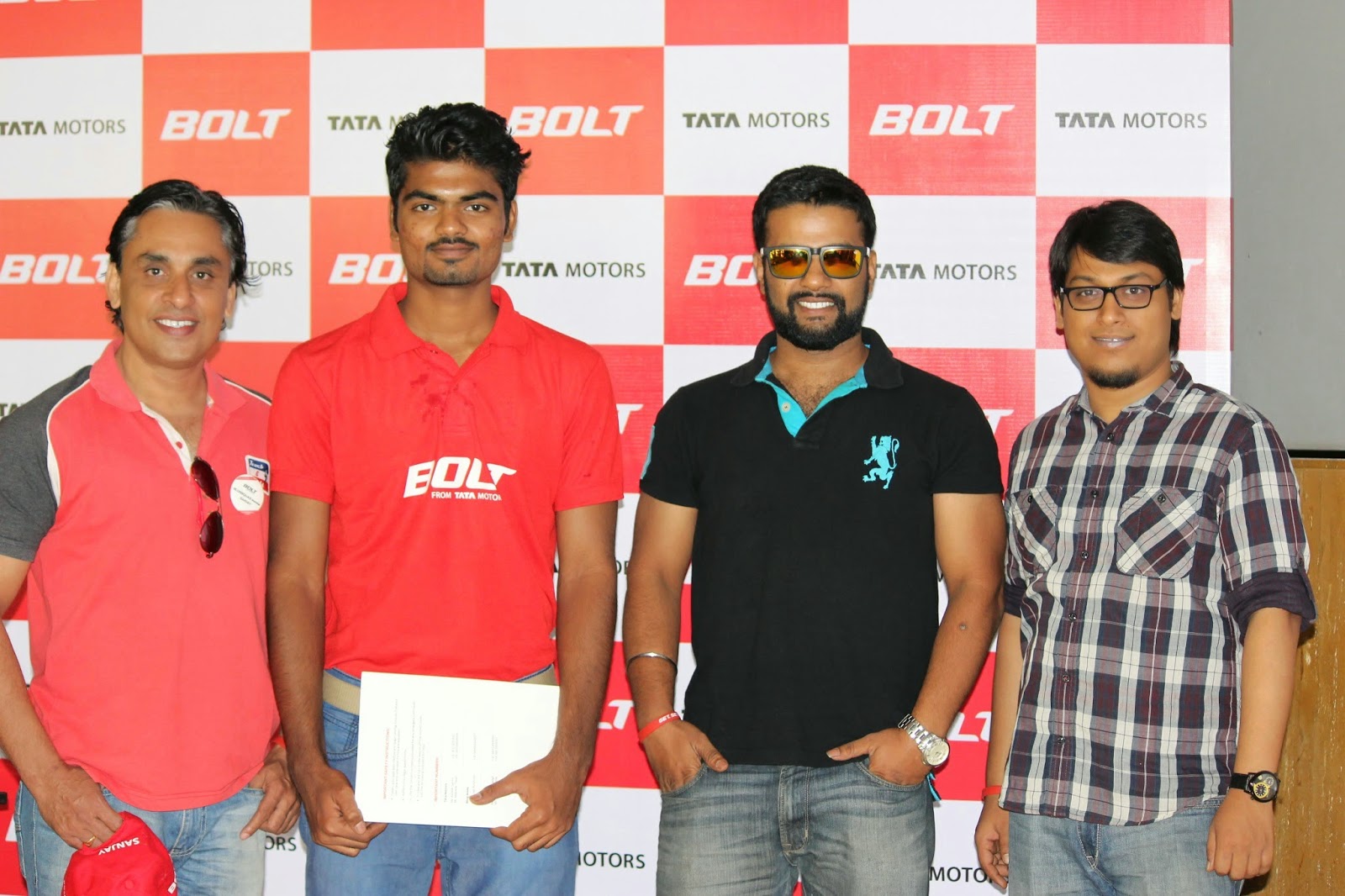